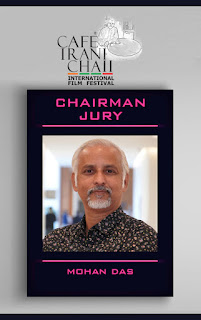 After doing his Financial Management from Mumbai, award winning Writer, Director, journalist and researcher, Mohan Das dabbled with Advertising for some time only to later join legendary directors Hrishikesh Mukherjee & Tapan Sinha to learn the craft of direction. Over the years, Mohan Das floated the now successful Lakecity International Film Festival in India, his mission and focus is to widen his horizons by taking the concept of film festivals to various cities across India and the globe. With Lakecity being a yearly event well entrenched on to the scene, he is all set to promote Indian Cinema, Art and Culture onto a global platform by joining hands and collaborating with a multitude of film festivals in many countries or offering support to a host of upcoming festivals across the world. Café Irani Chaii International Film Festival which is now in its debut edition is an offshoot of the same idea that aims at bringing the science, art and emotion through world cinema to the people.

Offering a premier showcase opportunity for talented film makers and artists, celebrates avante garde cinema, felicitates masters and achievers from all walks of life, the aim of Café Irani Chaii International Film Festival is to bring countries closer by building bridges to enable cross cultural exchanges, social understanding and creative ideation. As a Festival Director, Jury and Curator, he is working tirelessly to bring films to new audiences across Eon Films through programme of screenings, working with partner organisations and of course, looking forward to delivering a great festival. 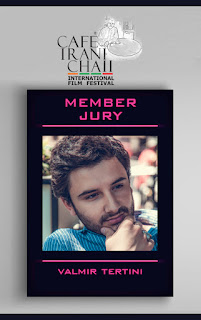 Winner of several important international prizes for films that he made, Film director Valmir Tertini is based in Tirana, Albania. After his basic studies, he completed his higher studies for medial arts in Pristina and later a master's degree in film and television at the Academy of Arts in Tirana. His projects have been part of hundreds of festivals around the world. He has conducted some workshops in Europe for the 7th Art, Cinema as well as Founder of the educational project for younger students, Skena workshop and training in the field of cinematography. Coordinator of DoArt organization in Tirana as well as a Lecturer at the university in the liberal arts department, directed film & mass communication, he is the winner of 19 international and 3 national prizes. He writes for TV and movies in newspapers in Kosovo, Albania and Macedonia and has published four books. 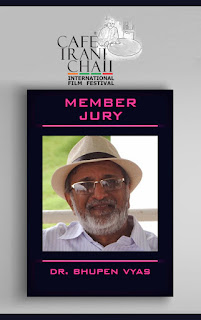 Photography is an art and a photographer is an artist. Dr. Bhupen Vyas started his career at a very young age of 19 as a still photographer. However his passion for films led him to establish his own audio video studio with in house facility in 1983. And with one thing leading to another, he jumped into the field of film making and he has approximately 150 documentaries, ad films, educational films, corporate films to his credit. A film on Late Shree G D Birla - The Last Journey, Rukka Village - a film on development and adoption of village and many more such films can be credited to Dr. Vyas. His advice to youngsters who wanna carve a career in this industry is - don’t be afraid to challenge yourself by trying something new, it may open doors that you hadn’t considered before. So, go ahead, discover what you are passionate about, and then learn as much as you can on that subject to become an expert. 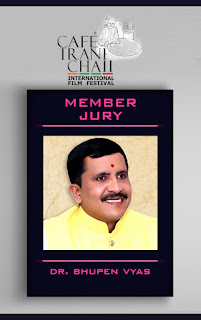 Winner of several important national and international awards, Santosh Barne is a highly successful businessman and a social activist in the field of education and more. With a keen interest for cinema and especially those with a socio inspiring subject is the kind of cinema that inspires him to work on. A Strong Youth is a Strong Future - is what he believes in and he has made this his mission in life to mentor and empower the youth for the purpose of maximizing cinematic and academic achievement!!!

CICIFF
Passionately Created, Intelligently Designed and Endlessly Inspiring, that’s Café Irani Chaii International Film Festival for you that believe in the power of original Cinema. Regardless of Genre or Screen Size, CICIFF is all set to sow the seeds in the festival circuit with new ideas to reveal new worlds and fire up your passions, vision and soul.